Solar academy : what for ?

Solar energy, an opportunity for Africa? Yes, no doubt if we look into date from the African Development Bank which in 2017 estimated the potential of solar energy at 1000 GW for the whole continent. The consensus on the need to provide concrete responses to the energy crisis in Africa should therefore favour an unprecedented expansion of solar solutions. Skills and know-how in the field of solar energy are now sought after throughout the continent. Continuing the development of solar energy to ensure sustainable development in Africa: it is to meet this challenge that the first solar academy in Africa was created. It was designed by Solektra, an industry leader whose expertise is particularly recognised in off-grid solutions in rural areas. 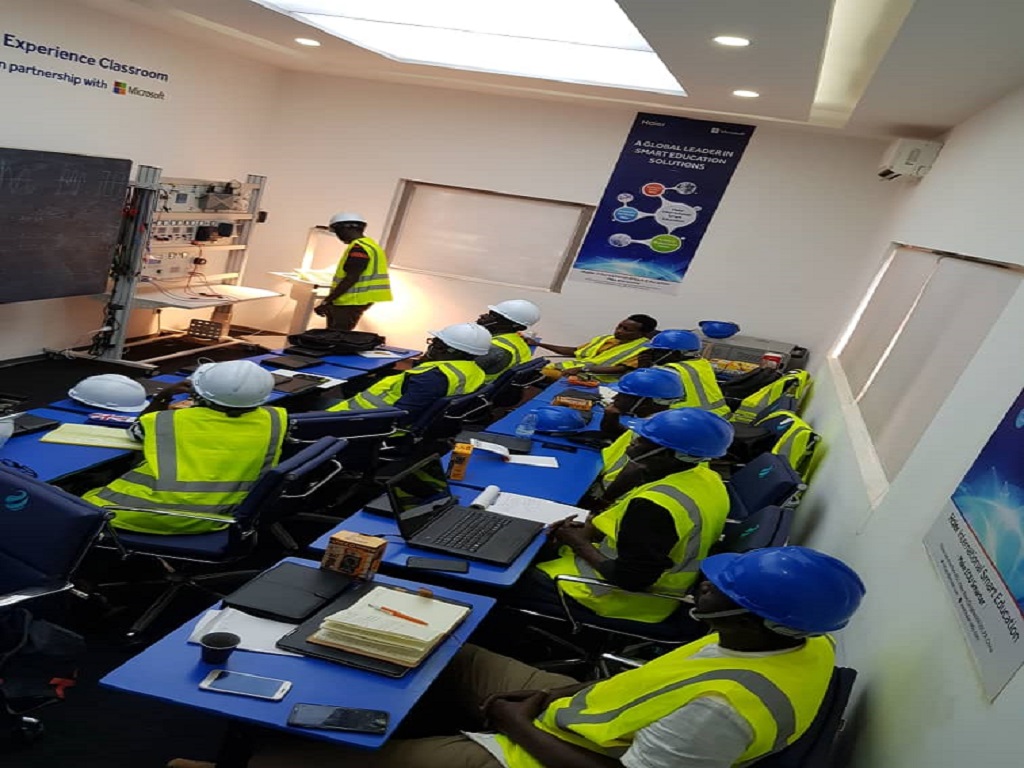 Objective 2: To set up a large Solar Energy Laboratory, complying with international standards and equipped with the latest generation of equipment.

Objective 5: To become a recognized certification and accreditation centre for training in solar photovoltaic energy

The objective of the solar academy is to train a critical mass of young people and provide them with the various expertises required to democratize solar solutions, including design, sizing a,nd maintenance of installations. 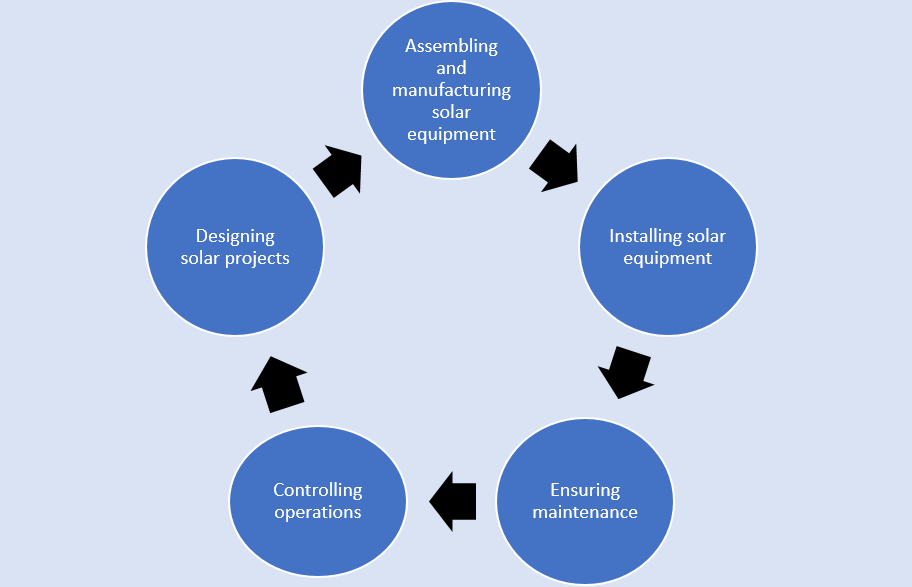 Since its creation in 2015, the Solektra Solar Academy has organized around thirty sessions over periods ranging from one week to three months, targeting a very diverse audience: engineers, aspiring technicians and skilled workers, representatives from agencies in charge of rural electrification, civil servants in ministries of energy and finance, NGOs and associations in charge of the promotion and empowerment of women – in particular to raise awareness among African households of the advantages of solar energy in their daily lives.

The academy has opened in 2019 opened a second campus on the international industrial platform of Diamniadio, in the district of Dakar in Senegal, within the Multi-Industries Group factory, which is, like Solektra, a subsidiary of the ADS Group. The aim is to create new synergies, since MIG, which has already recruited some alumni of the solar academy, will eventually be in charge of assembling the solar solutions marketed by Solektra.

In both Bamako and Dakar, the same concern is to combine theoretical and practical training; both campuses therefore include computerized classrooms and practical work rooms in which the participants’ knowledge is tested through practical exercises on real equipment. 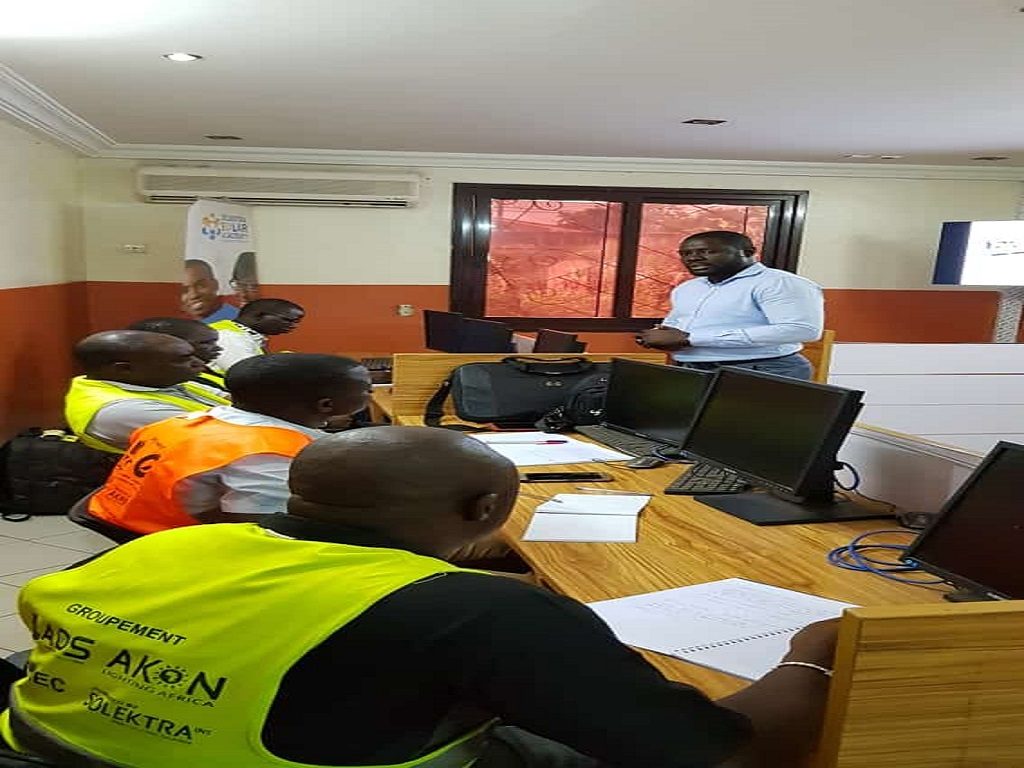 Deploying best experts in the field

Managing Director of Solektra Solar Academy Mali and Senegal, in charge in particular of defining and implementing the development strategy for both campuses; developing programs and sessions on photovoltaic solar energy and energy effic…

Project Coordinator for Energy, Water and Civil Engineering, in charge of prospecting and searching for opportunities, concluding the relevant contracts with the clients or public authorities concerned, conducting missions including follow-up on the ground by supervising the techni…

Solar training : what type ?
General trainings
The solar academy offers a first series of training courses on smart grids and renewable solar energy for those who wish to acquire basic knowledge of solar solutions. These are professionals who may be involved in the deployment of solar projects, including representatives of electrification agencies, civil servants from ministries of energy or employees of public electricity companies.

The UniTrain-I Photovoltaic Training demonstrates and explains the operating principle of photovoltaic cells.
The UniTrain-I training includes a number of experiments and vcase studies to help students tobetter understand problems related to electrical engineering. The various courses cover the production of electricity from renewable energies as well as distribution networks. Production and distribution processes requiring special treatment are studied in experiments carried out safely at very low voltages.

Advanced Photovoltaics EPH 2 training allows you to work on projects with industrial components.
The progression of the sun is realistically simulated. Emulators allow laboratory experiments to be carried out in the absence of sunlight.
The multimedia course “Interactive Lab Assistant Advanced Photovoltaic” is designed to focus both on theoretical knowledge and practical know-how, and to monitor date through detailed computerized measurement process.

This training realistically simulates the progression of the sun and allows practical laboratory experiments to be carried out in the absence of sunlight. The design of photovoltaic systems operating parallel to the power grid is realistic. Power converter and transformer techniques are used to stabilize the power grid.
The multimedia course using the SCADA Power Lab software provides practical knowledge and skills while evaluating the measured data through detailed computerized process.
A la carte trainings
“A la carte” training courses are also available; they are designed for a more expert audience, such as engineering companies or solar equipment installation companies, agencies in charge of electrification, companies active in small industries in rural areas. It is indeed possible for these audiences to develop specific sessions according to their needs, in order to improve certain skills in the targeted teams, or to put into practice theoretical knowledge through case studies or simulations. 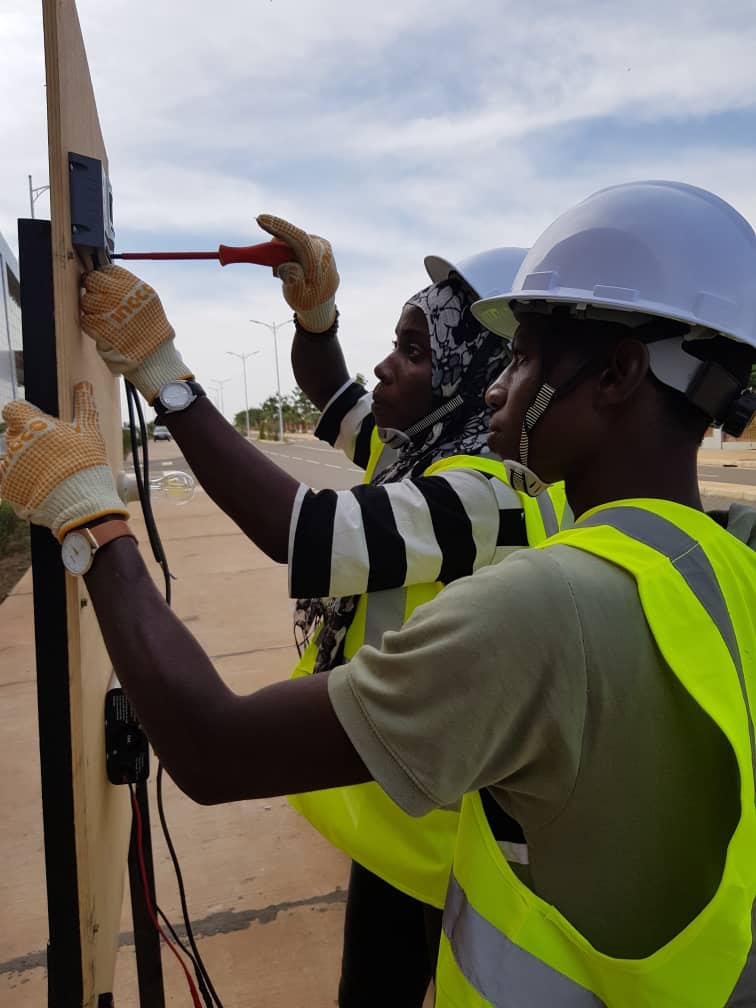 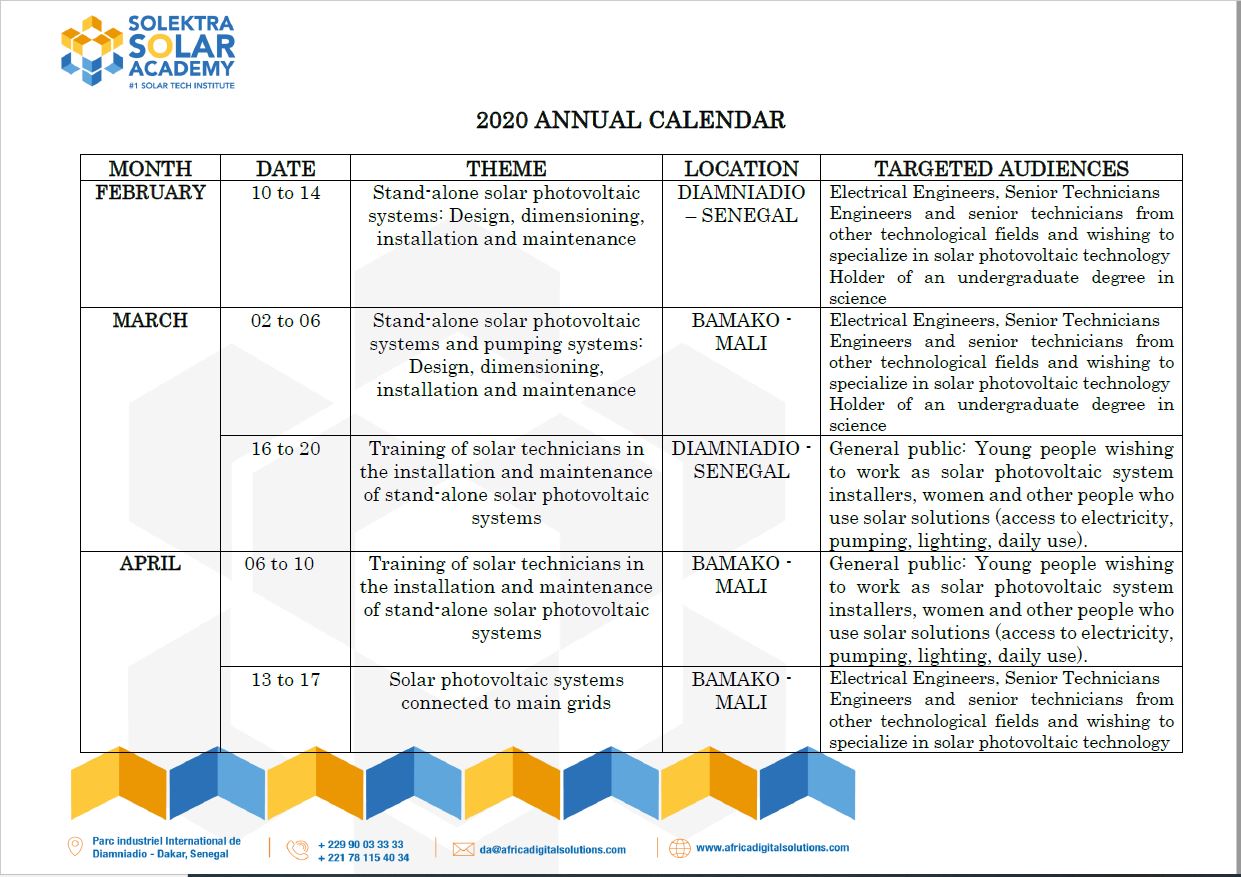 Calendar 2019-2020
Please check this page on a regular basis to be informed of dates of training sessions
Application : what process ?
Pre-requisite
Joining individual trainings

Would you like to attend one of the sessions of the Solektra Solar Academy in Bamako or Dakar? Please refer first to the calendar and send your registration request by email to this address [email protected]
. The application must include the following elements.

It is requested to send its request with a minimum of 15 days before the training’s starting date, so as to allow the Academy team a minimum period of time to look into the requests. Answers will be given within one week to ten working days. A training course is confirmed as soon as a minimum number of 10 participants are registered. The fee for one-week individual training sessions is fixed for the year 2020 at 300 000 FCFA per person and covers the following aspects: training session over 5 full days and coffee breaks. For training courses taking place on the Diamniadio campus, transfers between Dakar and Diamniadio will soon be taken care of free of charge with the setting up of a minibus service 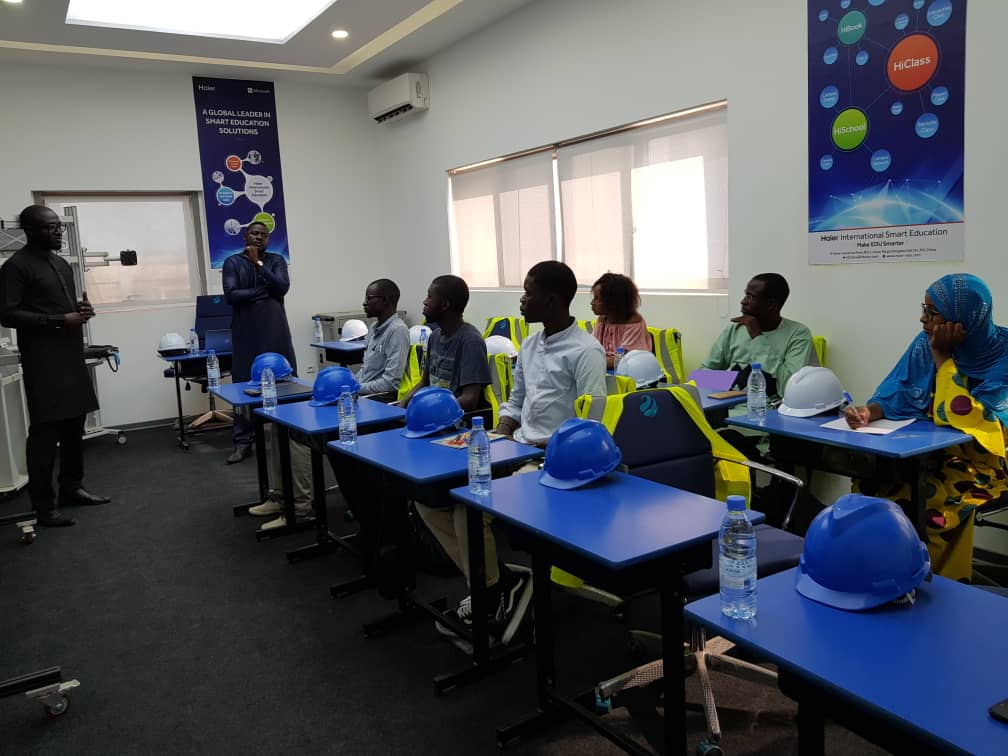 Joining corporate trainings
The training courses offered for companies or large organisations should include at least 5 people. The prices are defined according to the content, depending if it is derived from the existing catalogue or defined ‘à la carte’. Prices are generally comprised between 300 000 FCFA and 600 000 FCFA per person, excluding transport and accommodation costs. For any group registration, companies are invited to contact Mr. Patrice Dangang, Director of the Academy: [email protected] 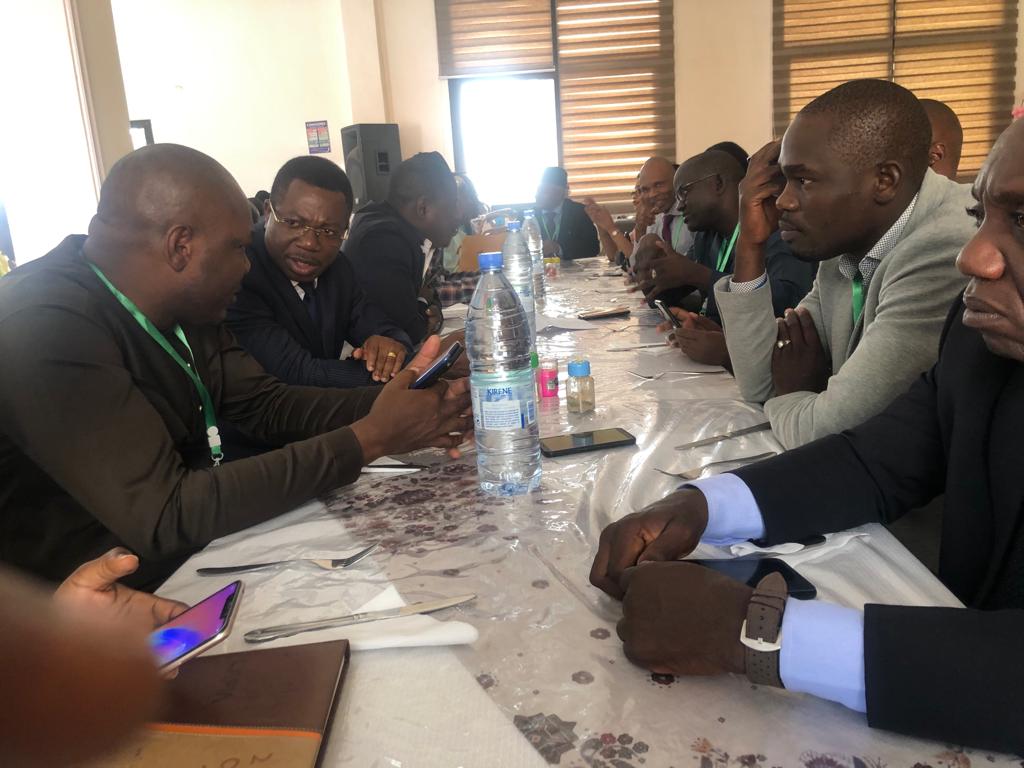 After the solar academy : what’s next ?
Solektra Solar Academy Certificate
Any training provided by the Solar Academy Solektra allows participants to receive a personal certificate of competence summarising the theoretical and practical knowledge acquired. Such certificate can be presented as proof of training to recruitment agencies, potential employers or training organisations (for those who wish to use the technical competence they have acquired at the academy to access to certain curriculums). 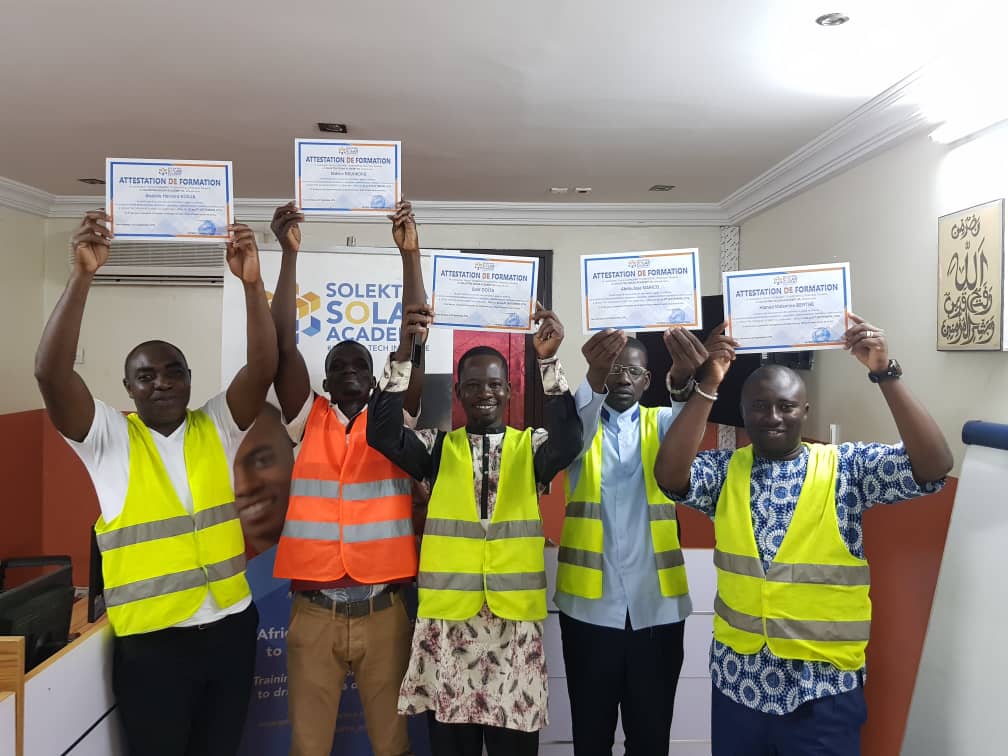 Solar jobs
What kind of ‘solar jobs’ can you find in Africa today? Opportunities are mainly in the installation and maintenance of solar photovoltaic systems in peri-urban and rural areas; solar is indeed emerging as a strategic part of the energy mix for isolated communities that are not connected to the national electricity grid; an increasing number of regional electrification plans are focusing on such solutions. Other potential opportunities include the design and assembly of solar solutions – from lighting solutions to more complex solutions that combine energy and access to water (solar water pump, sanitation, irrigation, etc.). 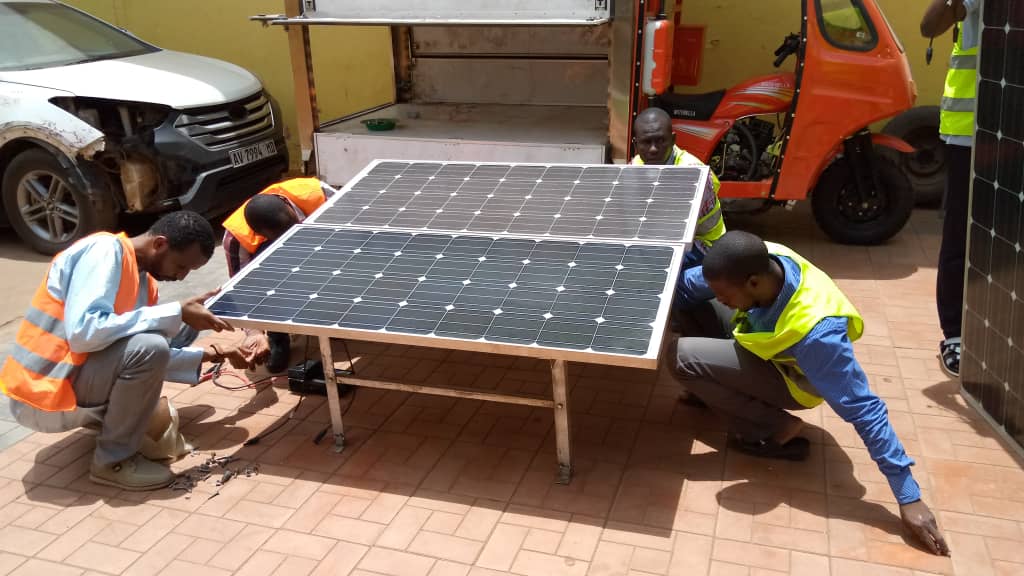 Testimonial
After being graduated from the Solektra Solar Acadamy in 2016, Ulrich Kounasso joined Multi-Inudstries Group in Dakar. 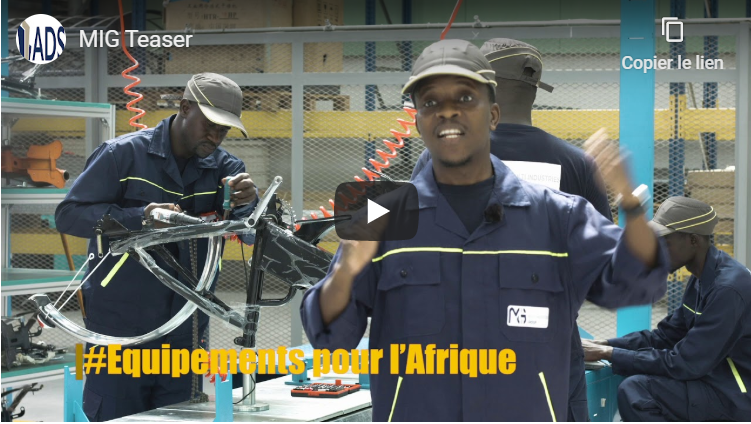